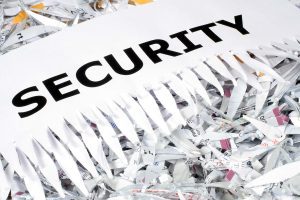 Our security containers are offered free of charge with regular monthly shredding service.

By law (AB2246), as of January 1, 2001 you must shred any document that identifies, relates to, describes or is capable of being associated with a particular individual.

The Supreme Court has ruled that information in your trash is “fair game” to anyone. Privacy laws make you vulnerable to law suits when personal records are disclosed to outsiders – even by accident!

The 1974 Federal Privacy Act was established to insure that government agencies protect the privacy of individuals and businesses with regard to information held by them and to hold these agencies liable if any information is released without authorization. 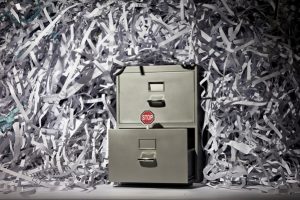 Theft, Vandalism and industrial Espionage are becoming ever increasing security problems. Today’s information explosion can be devastating to your business. With the increased use of office copiers and computers, staggering amounts of sensitive information are being generated and carelessly discarded.

Dun’s Review estimates that corporate espionage costs US businesses over $7 billion in losses yearly. It’s believed that one in four American adults have been defrauded in various identity theft schemes.

Your trash, your credit card, phone card, even your junk mail may be the source of a financial and personal catastrophe. It’s an unimaginable nightmare for most people, and a nefarious windfall for the growing ranks of corporate scavengers and identity thieves currently farming America’s trash. 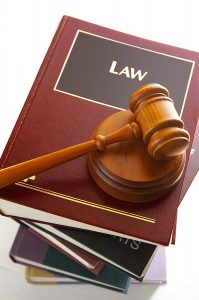 FACTA is he Fair and Accurate Credit Transaction Act, a new federal law designed to reduce the risk of consumer fraud and identity theft created by improper disposal of consumer information. The Federal Trade Commission (FTC) has issued their FACTA DISPOSAL RULE which:

According to the FTC’s, FACTA DISPOSAL RULE, “any person who maintains or otherwise possesses consumer information for a business purpose” must properly destroy discarded consumer information and “must properly dispose of such information by taking reasonable measures to protect against unauthorized access to or use of the information in connection with its disposal.”  The federal government is authorized to bring enforcement actions in federal court for violations of the disposal rule for up to $2,500 in penalties for each independent violation of the rule.  Contracting Data Shredding Services of Texas, Inc. to shred all of your consumer information is the best way to comply with FACTA.

The Health Insurance Portability and Accountability Act of 1996 (HIPAA) is a federal law that required the creation of national standards to protect sensitive patient health information from being disclosed without the patient’s consent or knowledge. The US Department of Health and Human Services (HHS) issued the HIPAA Privacy Rule to implement the requirements of HIPAA. The HIPAA Security Rule protects a subset of information covered by the Privacy Rule.